Another busy month in November saw us branch out into the worlds of live music, television, corporate and immersive events.

We kicked it off with some set pieces for a band called, Yellow Days, who were playing at The Electric in Brixton, so nice and local for us. We were offered some complimentary tickets for this one, we enquired as to what genre of music they were and were told, “phsyce metal” so we swerved that one.

Next up, was a set for the comedian, Chris Ramsey and his touring show, which was being filmed at the Newcastle Arena. This involved producing a load of picket fencing with some scenically painted brick pillars and grass verges, as well as laying  108 square meters of hessian backed carpet, which arrived on two rolls, safe to say the crew weren’t too happy about loading that one.

Some more flat hires came and went, while we built an American style letterbox and freestanding doorway for a literary awards ceremony. Then a really big job at the Saatchi gallery in London, kept the team busy for a few weeks as we produced a load of painted flats, laminated and painted plinths as well as some really nice units built from Latvian birch ply, this was for Elle magazine, who’s event included some brand activations for Nike and Swatch, which we also built.

That’s about it for this month, next stop Christmas as work around here tails off until the new year. 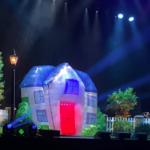 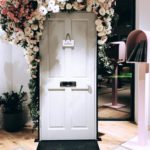 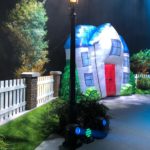