First blog of the year, only seven months in, anyone would’ve thought we were
busy. Far from it in January and most of February, the tumbleweed rolled in and much workshop maintenance was achieved. A smooth running workshop doesn’t pay the bills if there’s no work, thankfully we picked up a job from a large London based events company towards the end of February, which kept the wolves from the door. A re-branding launch event for the London Business School across two separate days was our knight in shining armour, an interesting set that consisted of a lot of open timber frames covered in an acoustic pvc mesh gave an interesting visual and feel of openness, yet areas were still able to be partitioned off to create differing environments. Built in a kind of modular fashion we were able to create three very different set-ups over the course of
one of the days and the set was able to be re-used for a series of satellite events afterwards.

The work really picked up again in March with some interesting TV and theatre projects, first up was a pilot for the BBC which unfortunately as yet hasn’t been commissioned. A chat show in the style of an American ‘Tonight with Jay Leno’ style of set, only this time the host was a virtual reality Vladimir Putin character, the set was projection mapped here at our workshop before being installed at The Hospital Club in Covent Garden, where we bumped into a few old faces from the world of light entertainment TV. Following on from this was a production of The Crucible at The Yard Theatre in Hackney. Nice to be back involved with the theatre world as it had been a few years.

Been putting off writing this blog for a while now, piece of cake…. 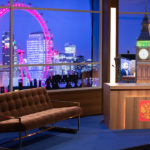