Hot on the heels of the last blog, here’s blog 6. Blog 5 took us up to the middle of June, so carrying on from there, We managed to squeeze in a few more interesting jobs in June, sandwiched between some events work.

A tennis themed ‘Bunga Bunga‘ bar at the Wimbledon Tennis Championships saw us produce a lovely scenically painted, timber fronted bar with a fancy stenciled logo, the client was very happy with this one and apparently the event was a great success.  We then produced a camera rig for a photo booth company who specialize in producing 3D photographs, mainly for corporate events. We worked closely with our metalwork suppliers to produce what had to be an extremely accurate curved camera rig, that was light enough to be easily transportable, yet stand up to the rigours of being used regularly on the events circuit.

Then came the ever popular Love Island Aftersun set, which came in for a refurb and some new additions, namely some more circular staging and

DJ booth/lightbox, which featured colour changing LED and stencil cut astroturf as well as the usual laminate and scenic paint effects. A new audience rostra was added this year and after much to’ing and fro’ing , we were able to come up with a cost effective handrail option that satisfied the designer, the producers and also the health and safety guy who’s  first big show this was. Who knew that a handrail had to withstand 2 kilonewton meters of pressure?  All this on a stage 1 foot high.

We moved on from that, straight into a last minute job changing the theme of a new pop up store in London’s King’s Road. This involved fabricating some reversible stable doors , that could easily be switched around for an even newer theme . Also some digitally printed canvas covered wall coverings all hung on split battens, so again, easily changeable.

And finally for June we produced a load of circular table tops, flats and some bespoke fascia to house LED light strips for an event in France. 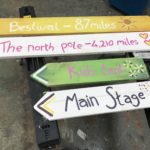 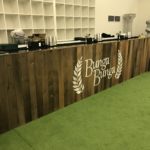 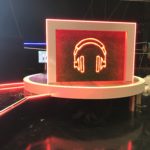